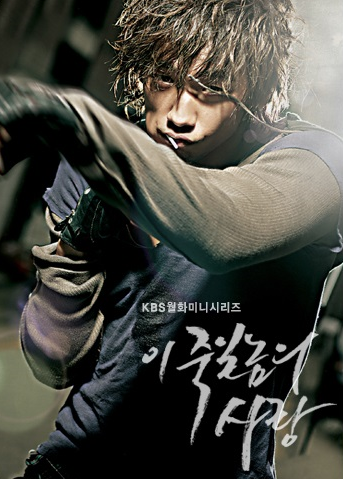 In A Love to Kill, Bi (Rain or Jeong Ji Hoon) plays a tough guy as the role of a K-1 Fighter, Kang Bok Gu. Bok Gu is a character who is dynamic in nature and grew up in a foster home. He falls in love with a woman whom he should not love. It was because of the woman, his emotionally-wounded brother fell off from the rooftop and became a human vegetable. So, his love is forbidden and inevitably tragic.

The woman is Cha Eun Seok (Shin Mina) who is a TV talent and movie actor. It was not that she jilted his brother on purpose, but upon a basis of misunderstanding, his hatred toward Cha Eun Seok grows more and more burning.

By becoming Cha Eun Seok’s private bodyguard, Bok Gu keeps concretely practicing his revenge upon her. He only desires ‘to bring his brother’s woman to her knees.’ He is gradually taking Cha Eun Seok to destruction, while he feels his love toward her growing deeper and deeper in his heart.

Bok Gu is a cold guy character without any special concern for woman. Martialart of hand-to-hand fighting was just kind of his escape he chooses from the shock of a spinster’s death whom he loved from a distance.