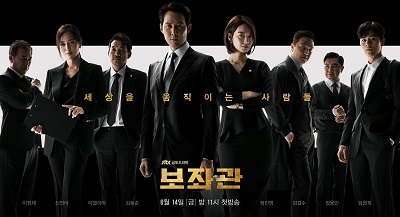 Synopsis:
This drama tells the story of politicians and their aides who try to climb up the political ladder.

Jang Tae Joon (Lee Jung Jae) is a lawmaker’s assistant who works at the National Assembly. He succeeds in making his boss leader of the party but, as an ambitious man, he wants to achieve more.

Meanwhile, Kang Sun Young (Shin Min Ah) is a lawyer who often hosts a television series where she talks about political affairs. She isn’t fond of aides, which is one of the reasons she doesn’t like Jang Tae Joon.