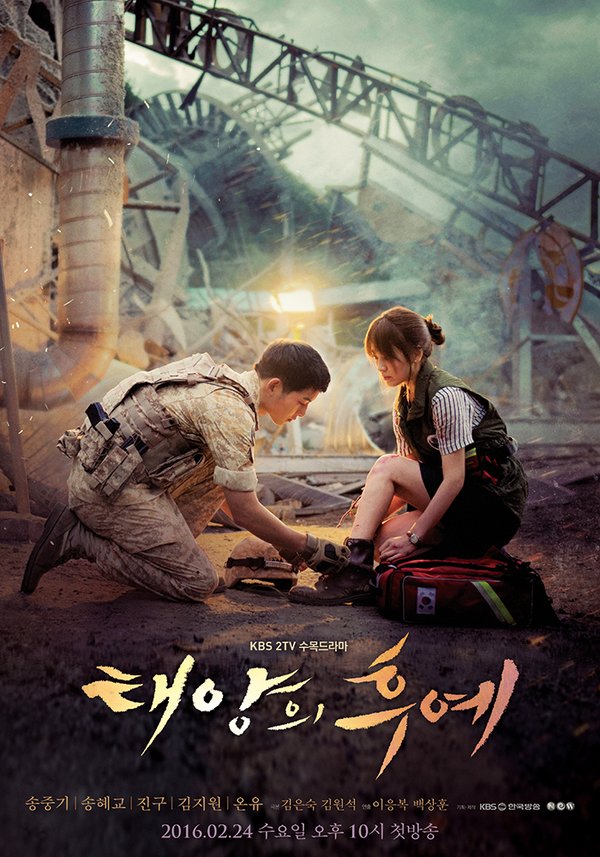 This drama was fully pre-produced before airing which is a departure from the live-shoot production format that characterizes most Korean dramas.

Yoo Shi Jin (Song Joong Ki) is the captain of the special forces. He catches a motorcycle thief with Sergeant Major Seo Dae Young (Jin Goo). The thief is injured during his capture and is sent to the hospital. Dae Young realizes his cellphone was stolen by the thief and goes to the hospital to retrieve his cellphone.

In the emergency room, Shi Jin meets Dr. Kang Mo Yun (Song Hye Kyo) for the first time. He falls in love with her immediately. Mo Yun mistakenly assumes Shi Jin is part of thief’s criminal gang. He proves to her that he is a soldier with the help of army doctor Yoon Myung Joo (Kim Ji Won).

Shi Jin and Mo Yun begin to date, but due to their jobs, their dates don’t go well. Shi Jin takes an order to lead his soldiers on a peacekeeping mission to the fictional country of Urk. Meanwhile, Mo Yun becomes upset that she fails to become a professor due to a colleague’s privileged background. When Shi Jin and Mo Yun meet again, they talk about their views on life and realize how different they are. Shi Jin, as a soldier, kills to protect lives and Mo Yun, as a doctor, tries to save all lives. They say their goodbyes.

Eight months later, Mo Yun rebuffs the sexual advances of hospital chairman Han Suk Won (Tae In Ho) and as a result, is assigned to lead a medical team in Urk. There, Shi Jin and Mo Yun meet again…