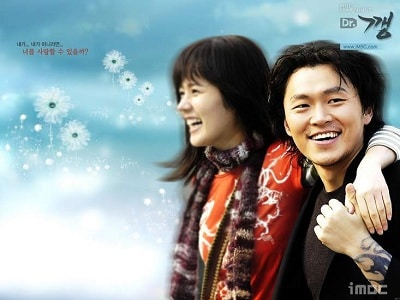 Dr. Kkang is about a lazy bum who disguises himself as a doctor to get a job, and while under disguise falls in love with a female doctor. Han Ga In plays the role of ‘Kim Yoo-Na’ who is a sassy girl and a doctor. Yang Dong Geun plays the role of the lazy bum ‘Kang Dal-Go.’

Kang Dal-Go is a middle leader of a gang who gets investigated by the police for some incident and gets kicked out of the gang. So he moves to Seoul from Busan and disguises himself as a fake doctor. While acting as a fake doctor he meets Kim Yoo-Na, a real doctor. Suk Hee-Jung (Lee Jong Hyuk) grew up as an illegitimate child but he studies and works very hard to become a successful prosecutor. Lee Hye-Young (Park Shi Eun), whose husband was killed by gangsters, is Yoo-Na’s classmate and sister-in-law and is raising her son alone. The drama shows the story of Dal-Go and Yoo-Na’s unbalanced love, with Hee-Jung forming the third party in their love triangle.