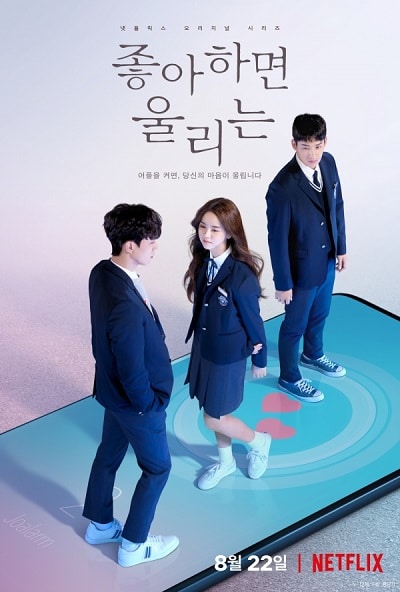 Synopsis:
It’s a pre-production drama. It’s based on the webtoon “좋아하면 울리는 / Love Alarm” by “천계영/Chun Gye Young” which was first published on 2014-Sep-14 via webtoon.daum.net.

Everything has to do with the creation of an app for mobile phones called Joalarm. The app alerts the user by means of an alarm when the person he or she likes is ten meters away. The app does not reveal specific details or personal data of the people the user likes, but it is able to reveal the exact number of people the user likes.

Kim Jo Jo (Kim So Hyun) is a young high school student; she is beautiful and intelligent. She is someone who seems happy to her fellow classmates. What they don’t know is that she has a dark and tragic past that she doesn’t want to reveal; her parents died when she was a child. She has been living with her aunt, but she has been nothing but unhappy. She, unlike the others at her school, does not download the Joalarm app.

Hwan Sung Oh (Song Kang), on the other hand, is an extremely popular student, is always surrounded by friends, and is admired by many girls. He also attends at the same school as Kim Jo Jo. Since he was born he has had a life that many would envy, his parents are millionaires, but unfortunately, they do not show him affection or love. Yet, he goes on with his life thanks to the friendship he has with his best friend Lee Hee Young (Jung Ga Ram). One day Hwan Sun Oh finds out that Lee Hee Young is in love with Kim Jo Jo. Due to an incident Hwan Sun Oh ends up kissing Kim Jo Jo. What will happen to this love triangle? Can the application provide a solution to all their problems? They will find out that Love is closer than they could ever imagine.