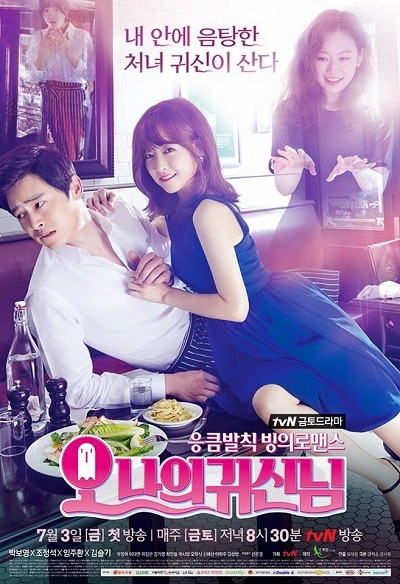 Oh My Ghost is a drama about a girl who is possessed by a ghost and a chef who doesn’t believe in ghosts.

Na Bong Sun (Park Bo Young) has an extremely timid personality and low self-esteem doesn’t have any close friends and is constantly getting reprimanded at her job as a restaurant sous chef. She also occasionally sees ghosts, thanks to a shaman grandmother. One day, Bong Sun gets possessed by a lustful virgin ghost named Shin Soon Ae (Kim Seul Gi). To make up for the lack of romance in her short life, Soon Ae is determined to seduce as many men as she can by possessing various women, and she finds the perfect vessel in BongSun.

Bong Sun’s boss is an arrogant star chef Kang Sun Woo (Jo Jung Suk), whom she secretly has a crush on. Sun Woo still hasn’t gotten over an old girlfriend, but when Bong Sun seemingly gets rid of her shyness and suddenly changes into a confident, dynamic woman, she finally catches his eye.